In a very populated world as the one of the boardgames, we can consider as a real icon only few games. One of them … I'm sure … it is PanzerBlitz and his "family" (Panzer Leader and Arab Israeli Wars included).
Panzer Blitz was published for the first time 50 year ago … when the boardame's market was dominated by the Avalon Hill and a few other publishing houses … in a period in which the wargame was only for few lovers.

In 1970 Jim Dunnigan designed it and then published a trial version in “Strategy & Tactics magazine no. 22.The 70s and 80s were years of great success for the game with over 320,000 copies sold. A significant number if you consider that, today, a board game made by the most serious companies is launched only after obtaining a pre-sell booking of at least 500 copies. 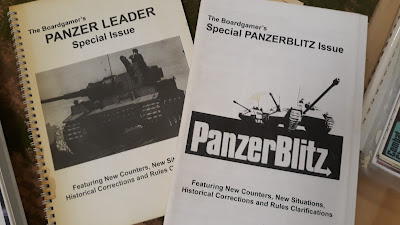 Panzer Blitz was the first tactical board game designed and based on real military operation manuals. Manuals that were still partially classified when it was written. The first version was based on WWII Eastern front scenarios with a hexagonal map that represented about 250 metres of terrain and, in which, every turn were around 6 minutes of real time. The subsequent Panzer Leader was created to fix some issues of the original Panzer Blitz and to introduce a series of new scenarios (Normandy and Ardennes) with new units and functionality.

Panzer Leader uses simple game mechanisms, the game dynamics and his set of rules are able to satisfy both expert and starter players for their realism. The game is perfect for two players but It is possible to increase their number till six and even more. The map, combined in different variants, can create a lot of scenarios … micro or macro … without a reduction of appeal for the wargamer. The counters are easy to understand on a graphic point of view and complete of all the information needed for the game. For example the vehicles have black silouettes while the infantry and other weapon uses the NATO symbols that well represent
their real characteristic. 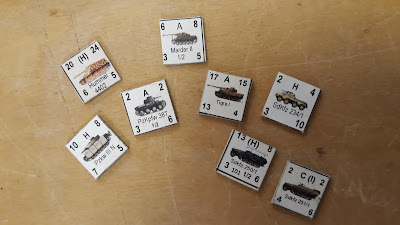 Wikipedia … in its game description … reports the difficulty to destroy enemies units with the simple direct shot, stimulating the players to use combined attack tactics. This is exactly the strategy used during the real WWII fights and in moderd times! Another point that attests the game value.
Today a lot of people thinks that Panzer Blitz or the other tactical Avalon Hill’s board games of the same family are old and outdated.
This is not correct … the evolution of Panzer Blitz never stopped. Considering the 500,000 boxes sold including Panzer Leader and AIW … I think that most of the wargamers over 40 years old have at least a copy of these games in their house. Many of them played it more and more times creating even new variants and scenarios.
After Panzer Blitz release, Avalon Hill’s magazine (The General) published some articles with the explanation of complex rules, scenario analysis and interesting additional scenarios. The same was done for Panzer Leader with a first important variant: Panzer Leader '40, with new scenarios and new counters to simulate German blitz during 1940 in France.
This was only the first step ... More than 200 new scenarios, including official and "home made", have been created by then by The Boardgamer, VAIPA, Old Soldiers Magazine and others. It is possible to find a list of them here www.grognard.com and the number is impressive although vastly incomplete. The range of scenarios is exciting …  from Finland to the African desert, from Ethiopia to Korea, passing through the "what if” and the scenarios between NATO and the Warsaw Pact. All of them are free thanks to the web. 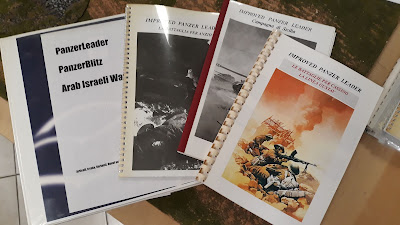 Another important step for the evolution of Panzer Blitz and Panzer Leader  was an important article published on the web on www.grognard.com by Carl Fung: “Panzer Leader and Panzerblitz supplemented by The Arab-Israeli Wars rules”  (https://grognard.com/variants/plpb.txt) in this article a simple set of rules allowed the player to adapt the “old” game system to the more “modern” Arab Israeli Wars’ rules, included a conversion table pointing out the need to reduce the speed of the vehicles. With this variant and the speed review, the dynamics and weapon systems have got an important update and a lor of realism has been added.

During the 90s, a small group of Italian gamers (Sergio Cuoghi, Enrico Tagliacuzzi, Paolo Artioli and Massimo Cottafavi) started to create a lot of new scenarios for Panzer Leader… Dieppe and Goodwood operation only to name two of the most important. Then they started to elaborate with the latest game of the Panzer Blitz family… Arab Israeli Wars … and based on it, like the above mentioned Carl Fung did on www.grognard.com, developed an important, deep overhaul of the original game. The most important change is the reduction step for all the units, the speed has been reduced as mentioned, all the optional rules have been included in the basic rule set, etc. In this way they created an updated game system that improved a lot the original one whitout bringing any complexity on the game dynamic or adding more complication to the rule set. A great work on the rules, counters and a deep unit revision that is able to keep high the interest for this boardgame with a lot of new scenarios: Sicilia, Ghotic line, Cassino, Anzio and so on. This new version had only one limit … the rules were in Italian only.
This new version is an exceptional game. For who know the basic rules of Panzer Blitz/Panzer Leader/ Arab Israeli Wars, a few hours and a couple of scenarios are enough to understand all. The scenarios … in particular the Sicily invasion and Salerno landing … are very dynamic and includes macro-scenarios well designed with the possibility to involve till six persons. 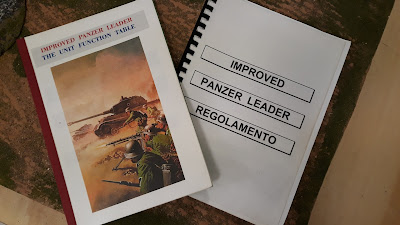 I purchased all the new scenarios, rules, counters of the Improved Panzer Leader by mail years ago (internet was not available then) and immediately we started to play it.  During these years the small inconsistencies found of the new rule set have been fixed completing the “life cycle” of this game. The counters have been re-made, in colours, adding more realism (look at the picture above). Now it is also possible to find on the web new very well done maps, that are currently used for our games..

If today an "old" player saw a new Improved Panzer Leader scenario, he would have a hard time to recognize it as the "old" game. Today, Improved Panzer Leader is more modern than ever.
Unfortunately, without further developments by those who originated designed it, my only hope is that someone can translate the rules in English and share them on the various websites and Facebook groups dedicated to this game.
I cannot forget that … when I moved to Turin few years ago… I wrote on a Facebook group … “There is someone that plays to Panzer Leader in Turin?” … after a couple of minutes I received from Luca, the president of La Piccola Armata, “Yes I’am … when we start?” 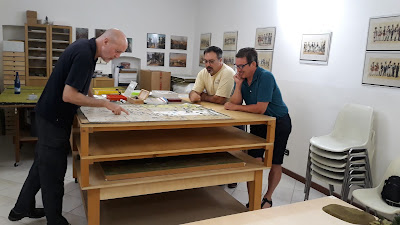 Some days after Luca’s reply I started to play at La Piccola Armata, my new club in Turin, Italy. Now, every weeks, I play with some of my club mates one of Improved Panzer Leader scenarios. Till now we played: Sicily, Ardenne, Salerno, Normady small, medium and even macro scenarios. I hope that this post … written in a modest English … could awake the interest for this game that for me it is so impressive.