Last Sunday my friends organized a battle between an Austrian and a Franco-Italian army. The battle has taken them four hours and has involved five of my club mates: Giancarlo and Luca (Austrians) vs Luciano, Nevio and Giuseppe (French army). Ezio has followed the battle as a kind of judge. 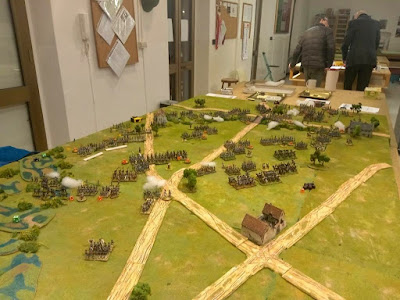 They have decided to use 15mm miniatures. The minis are part of Riccardo, Ezio, Luca and Luciano collection
The battle they have fought was ispired to Sacile battle (also  known as battle of Fontana Fredda). It tooks place in Italy near Livenza river not very far from Sacile modern town. It was part of the Napoloenic wars ... more exatcly the Fifth Coalition campaign.
In April 1809 Archduke John of Austria invaded Veneto (northeastern italy). On April 15 , at Pordenonte, the Austrian advance guard routed the French rear guard and, the following day, Eugene de Beauharnais (Franco-Italian leader) decided to attack the Austrians east of Sacile.
French forces are coming on battle field ... 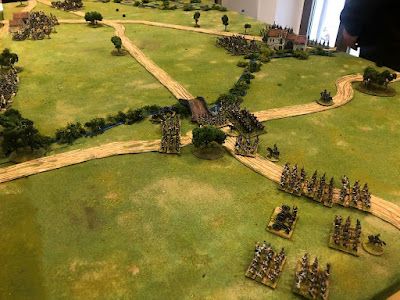 Both in the real battle and the our match the two armies had an equal number of foot soldiers. Below some Austrian attempt to reply to French's attack 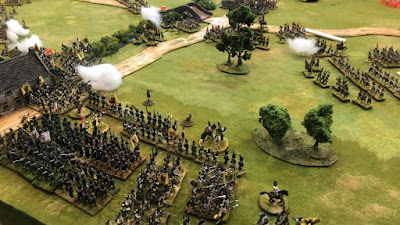 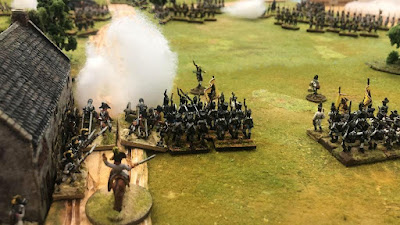 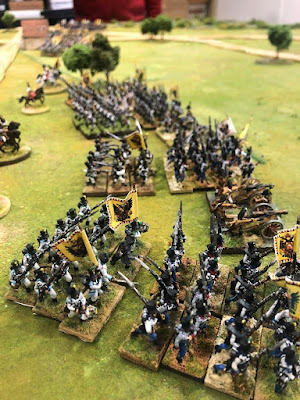 At the end ... as well as in the real battle ... the difference was created by Austrian cavalry 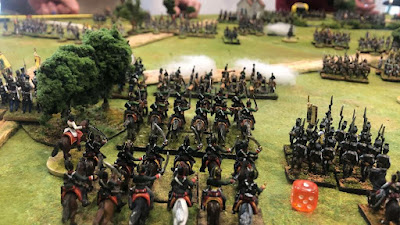 In the history the battle was a strategical Austrian win. The Franco-Italian army suffered 3,000 killed, two colors and 19 guns fell into the hands of Austrians.

Eugene was forced to withdraw his army 130 kilometers to a more defendible position at Verona. At the end of April, news of French victories near the Danuble caused John to fall back to his country with Eugene in pursuit.

Also in our game ... after a lot of turns ... Austrians win the fight.