This year, for the first time, I have took part of Gioca Torino 2013 (GT13) as member of La Piccola Armata.

Gioca Torino is a annual event created by gamers for gamers and my association was one of the many local clubs involved. Free demonstrations, meeting with game inventors, role playing and board game tournaments are some of the activities of the exhibition.

La Piccola was present with three tables. The main table was obviously dedicated to the Marsaglia scenario,  another was for war board game and the last for a painting demonstration. 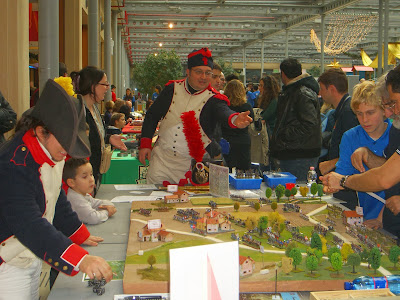 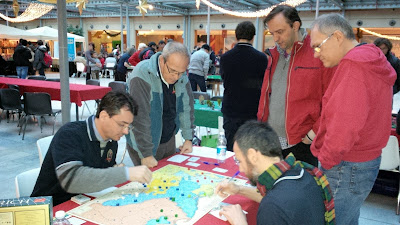 Every year the Gioca Torino attracts a lot of visitors and, during the two days of the exhibition, an average of 10/15 club members tried to explain what it is a war game.

The event had some echoes and a photo of Marsaglia table was published into a National newspaper.
My position was at painting table. It was an interesting experience and a lot of persons asked information about miniatures. Oddly the persons that were more fascinated  by miniatures were girls. 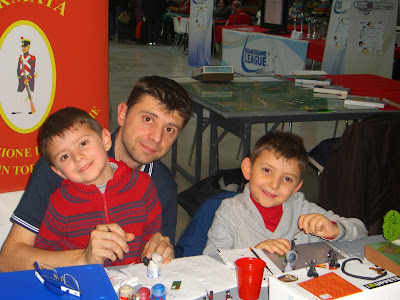 Alby, the boy on the right with the grey sweater, was really painting. Generally he helps me to prepare the miniatures (ie painting of black the soldier). During that event he has started to perfect his work using other colors (rose and blue) for the first time. I know that he is too young - he is 7 years old - but he likes it and he plays attention to miniatures … an aspect that is not already completely understood by the my second son. 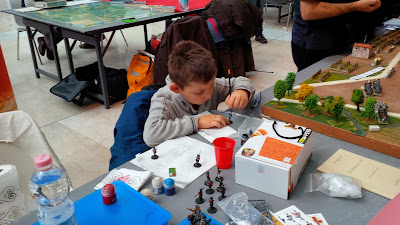 Unfortunately I took photos only of La Piccola tables because it was more demanding than I expected to paint and to reply to all visitors.  I hope next year to prepare a better album for the blog.