A couple of weeks ago, thanks to Ezio's initiative, we organized a quick game using Musket and Tomahawk. The rule system published by Tomahawk Studio that is designed for French-Indian and American independence wars.

I was the commander of the French forces, Biagio controlled the English army and Ezio was the referee.

All miniatures were painted by Ezio. Only a unit of Indians and the smaller unit of French marines are prepared by me.

Set up
Ezio deployed three houses at the table center, some cornfields and four woods. 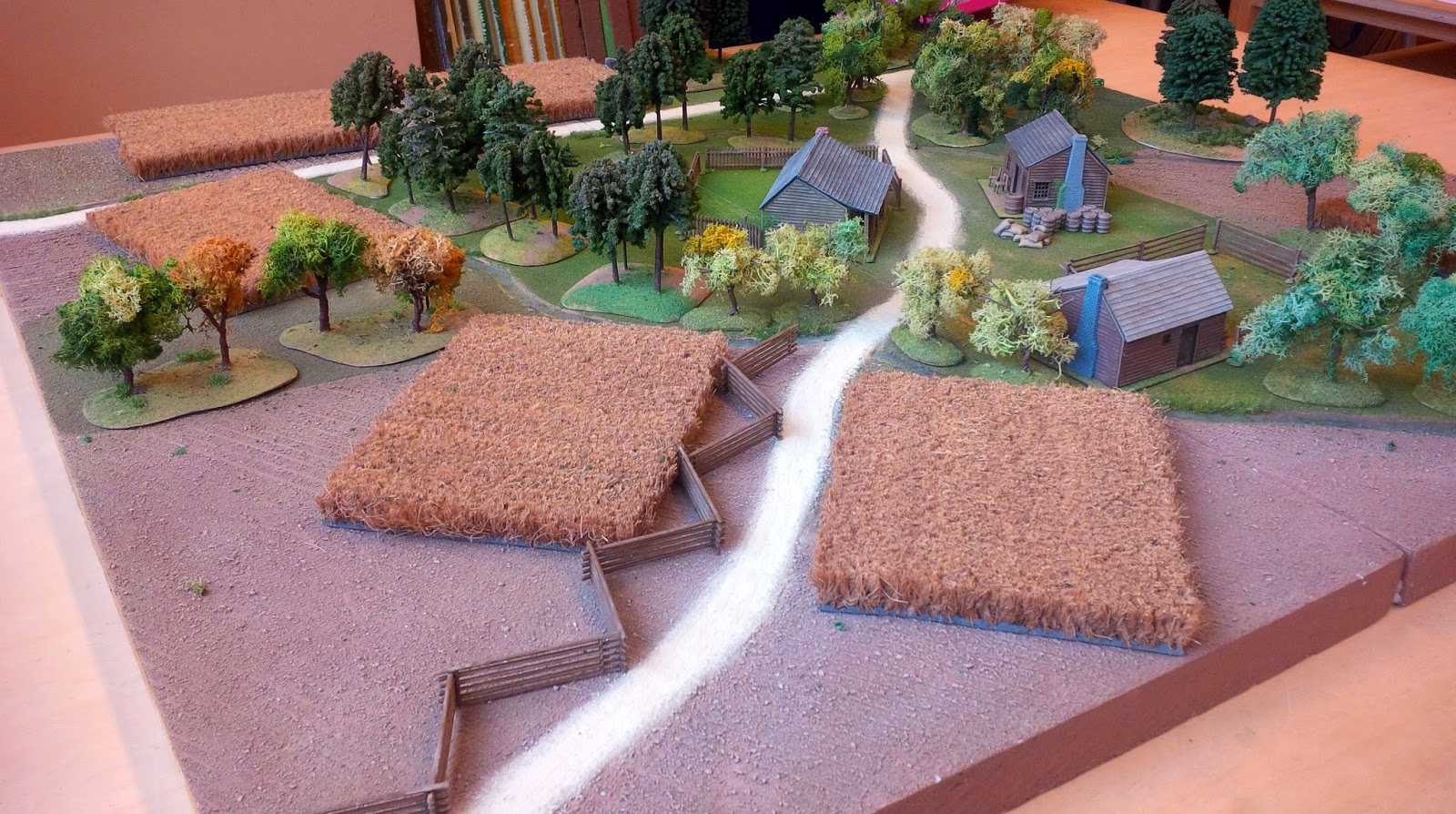 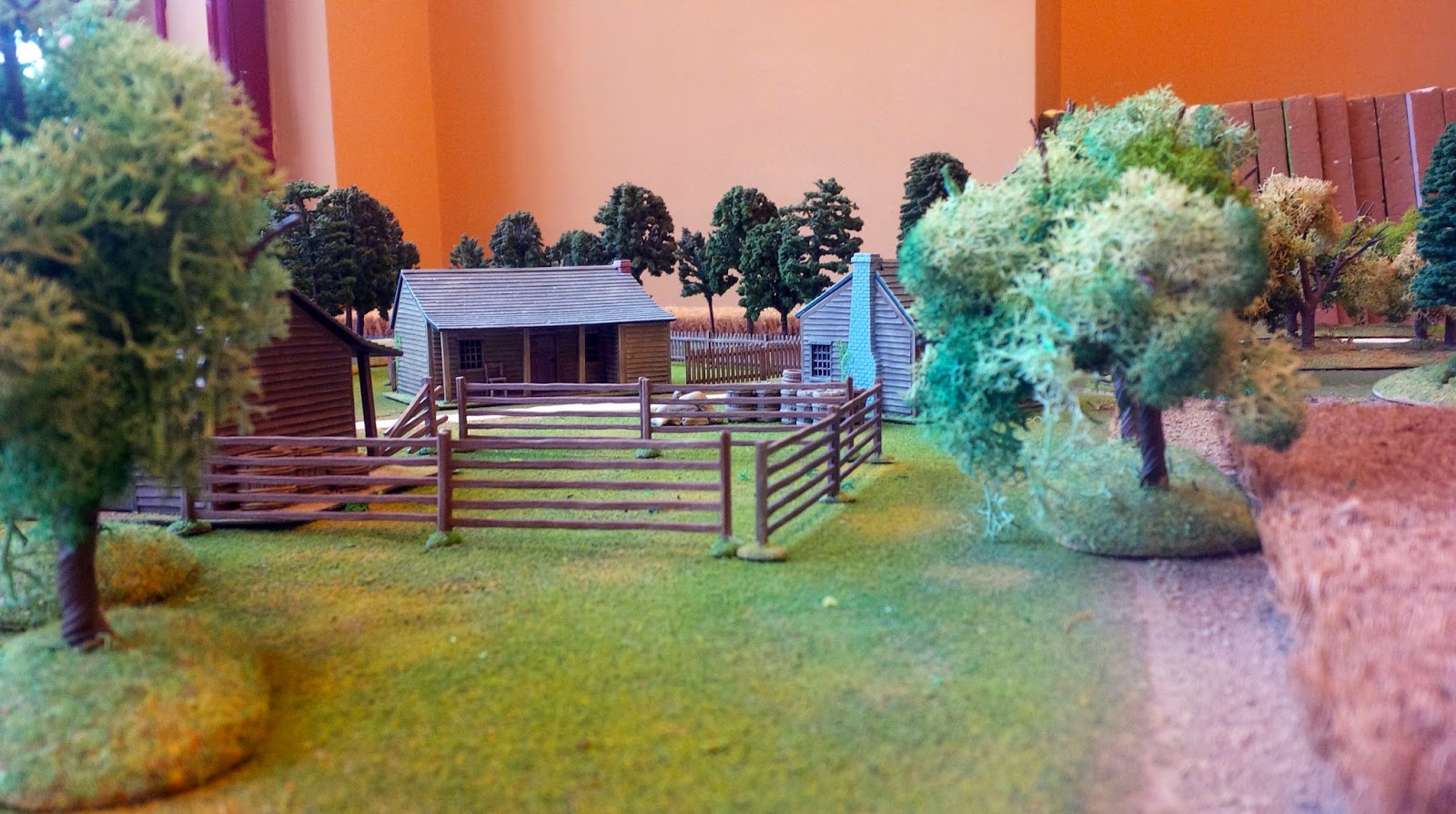 Objectives
We determined the objectives drew a dice. The British army had to protect a group of civilians  (Protection mission) while French-Indian forces had to slaughter the town's citizens (Slaughter mission).
In addition to his forces Biagio received 3 units of civilian and their leader.

Battle report
Biagio deploys one of his regular unit and the rangers at the center of the town.
All civilians are into the house at the back of the regulars. A unit of militia covers the left flank.
A unit of regular and a unit of militia are in reserve. 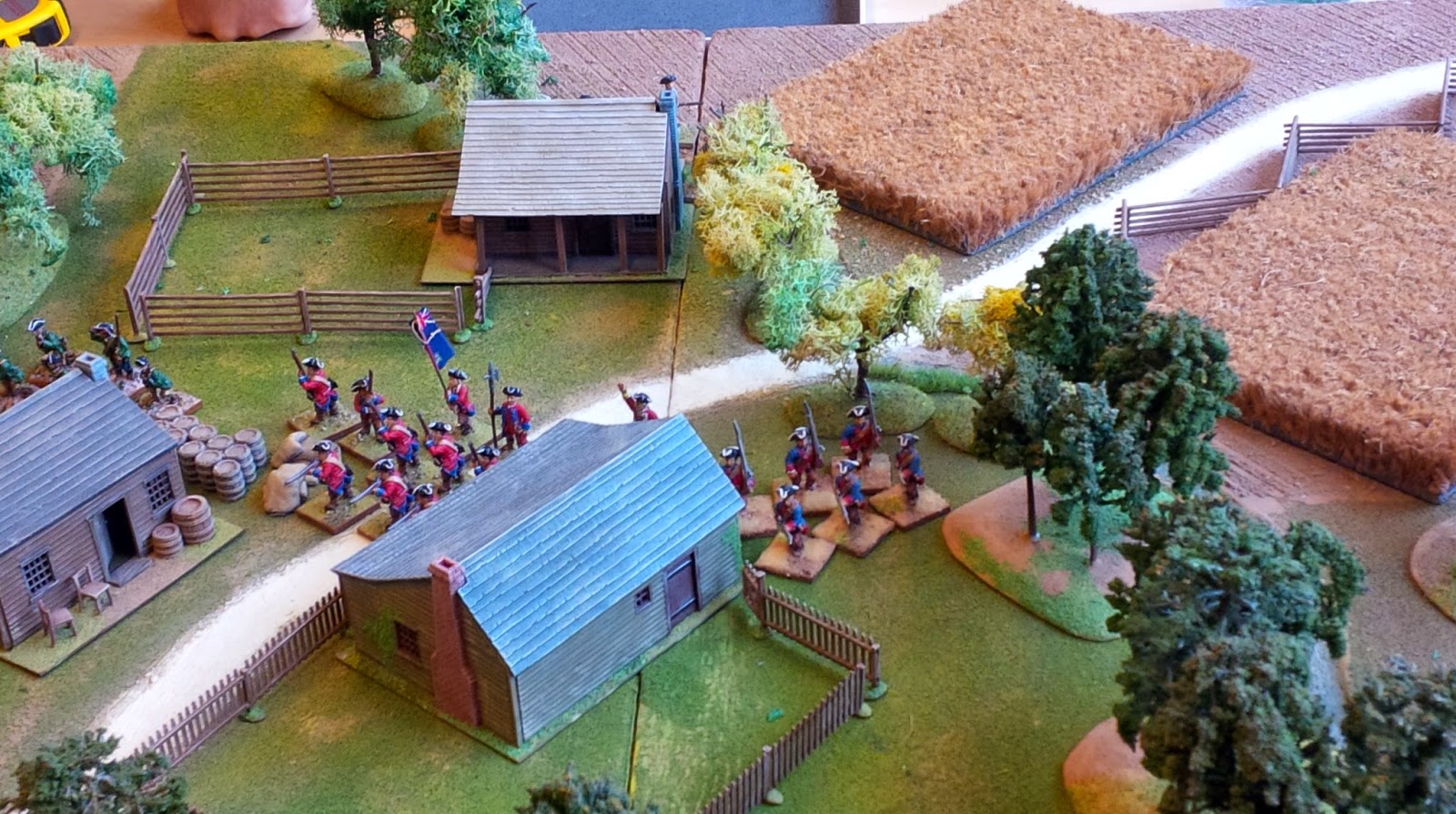 I placed a part of my units into the woods on the left and the remaining models on the right. I used the rules of dummy markers to deceive my adversary. On the left only a unit of 6 marines is real. All  Indians, my officers and the 12 marines are on the right. The idea is to attack on the flank the enemy. 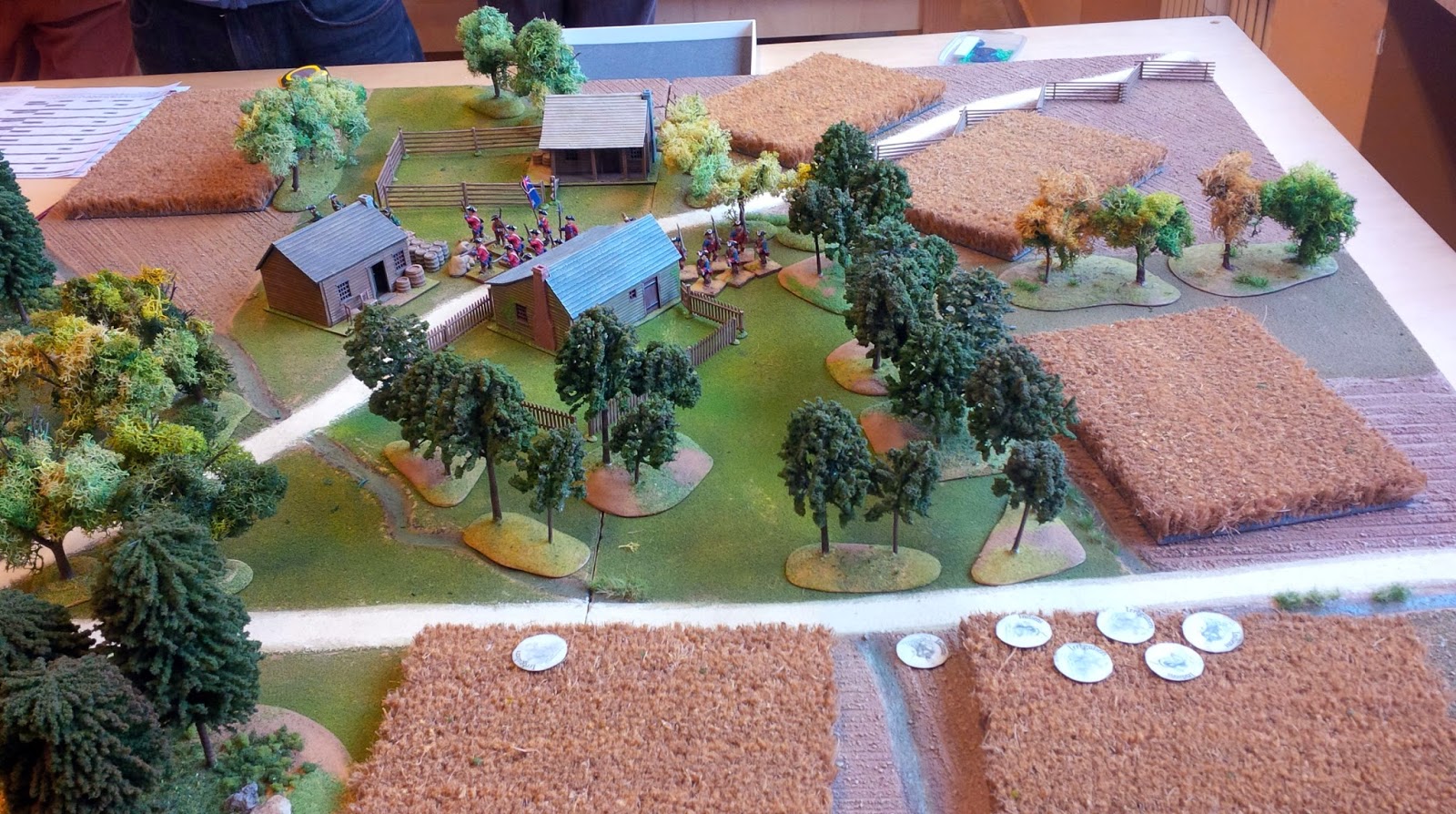 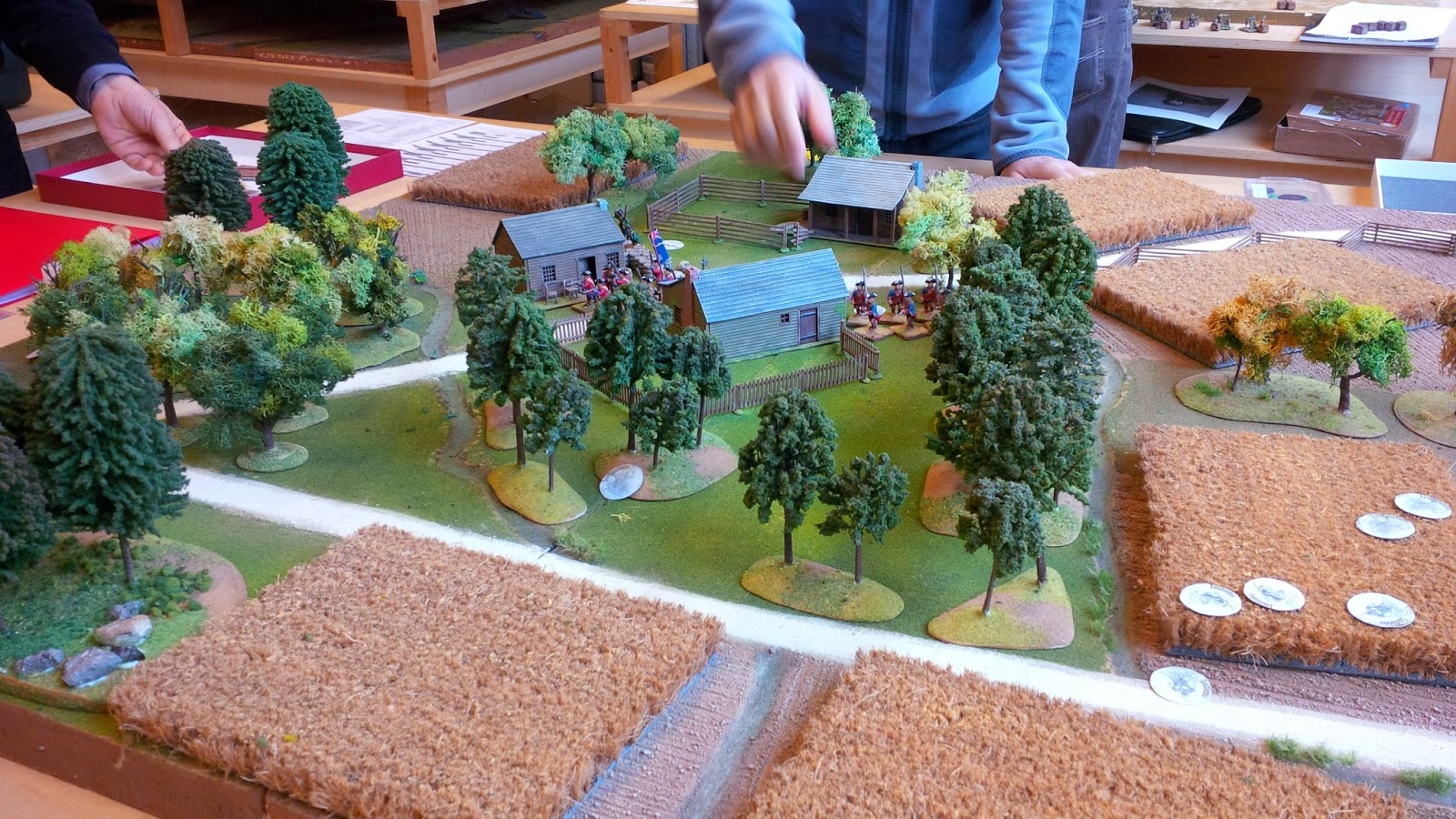 All my units are irregular and so they move very quickly. 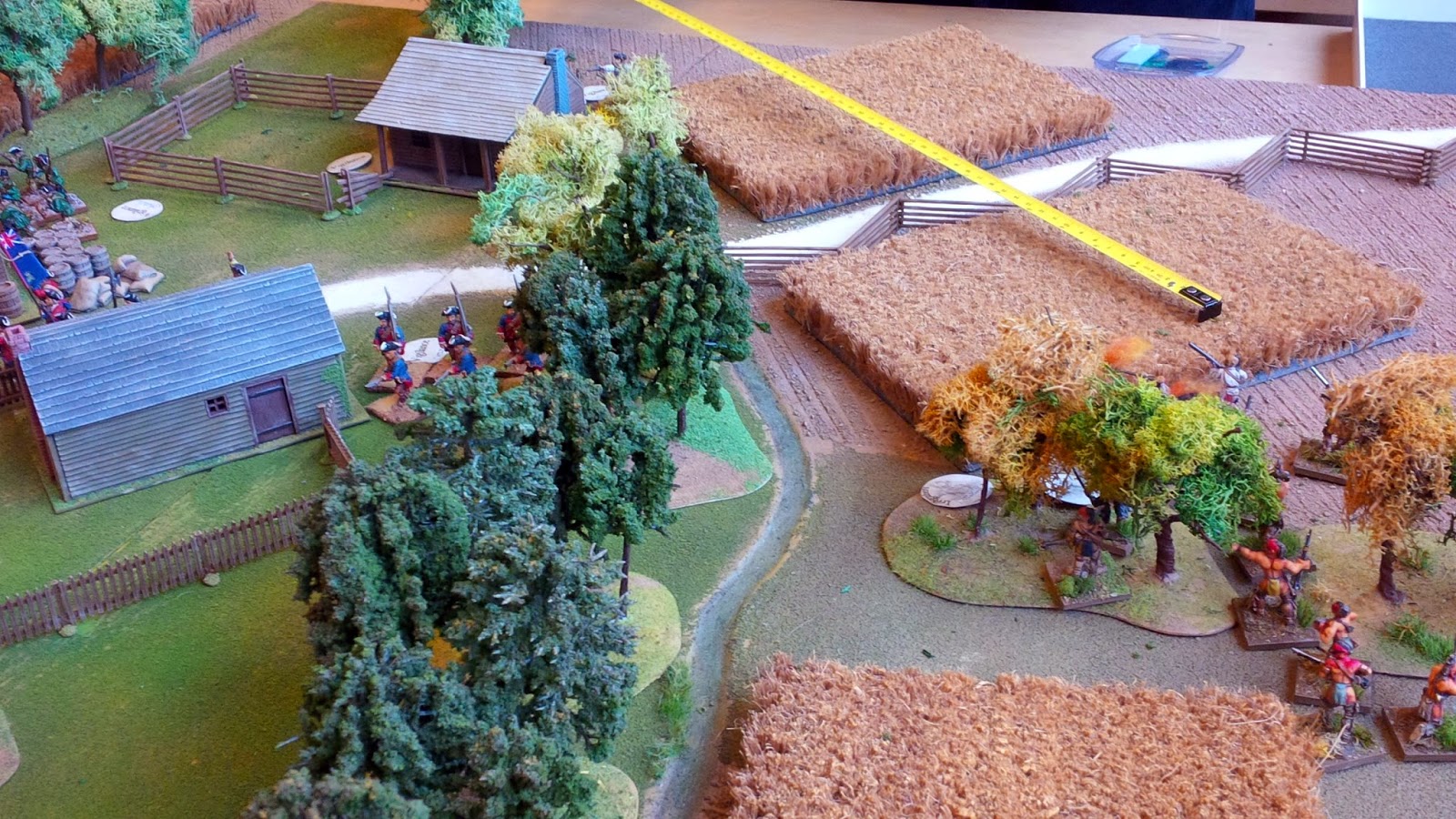 Biagio tries to block my flank attack with his militia  ... 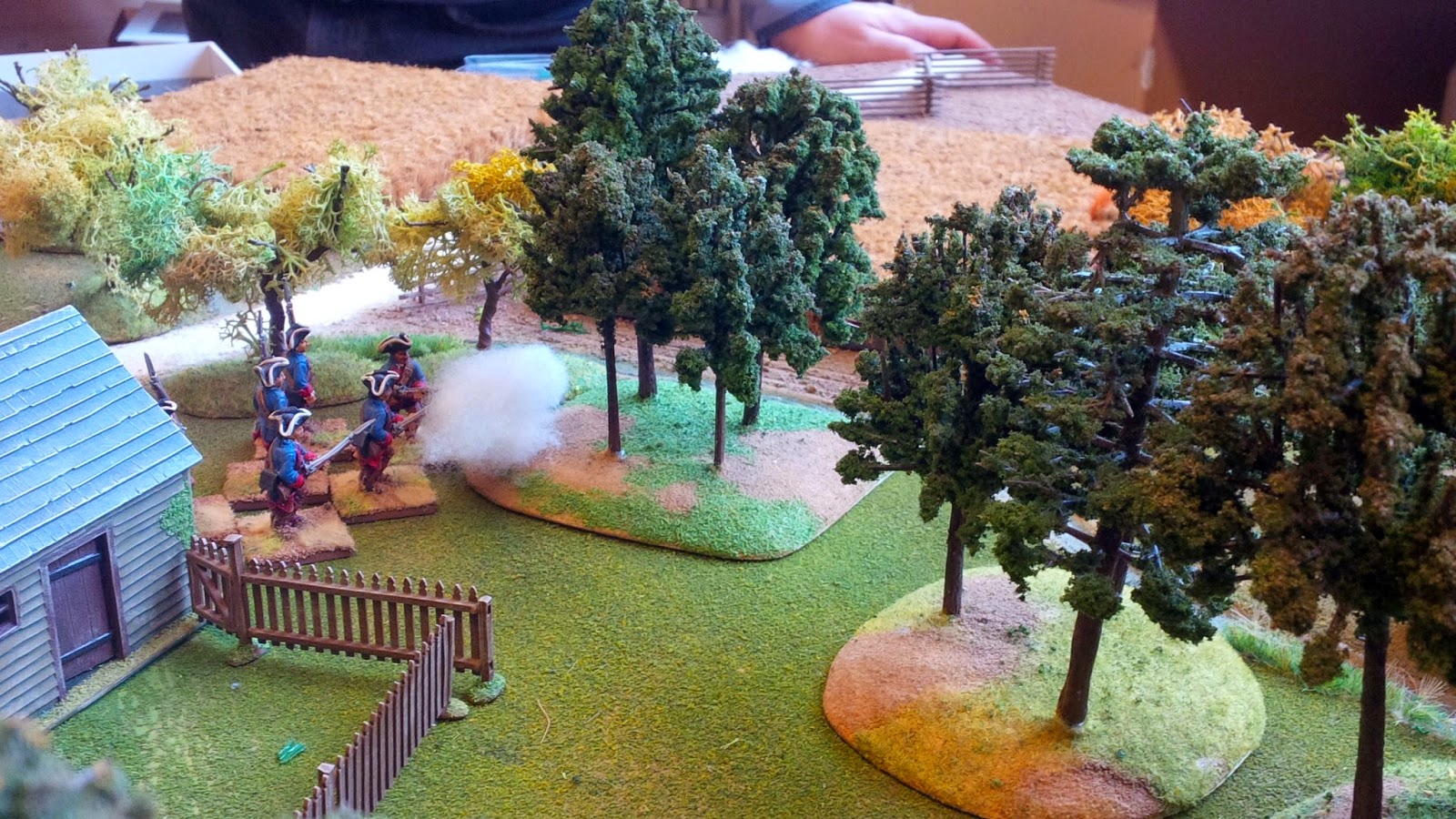 ..  while the British regular unit remains substantially fixed hit by my six marines that are arriving from the wood 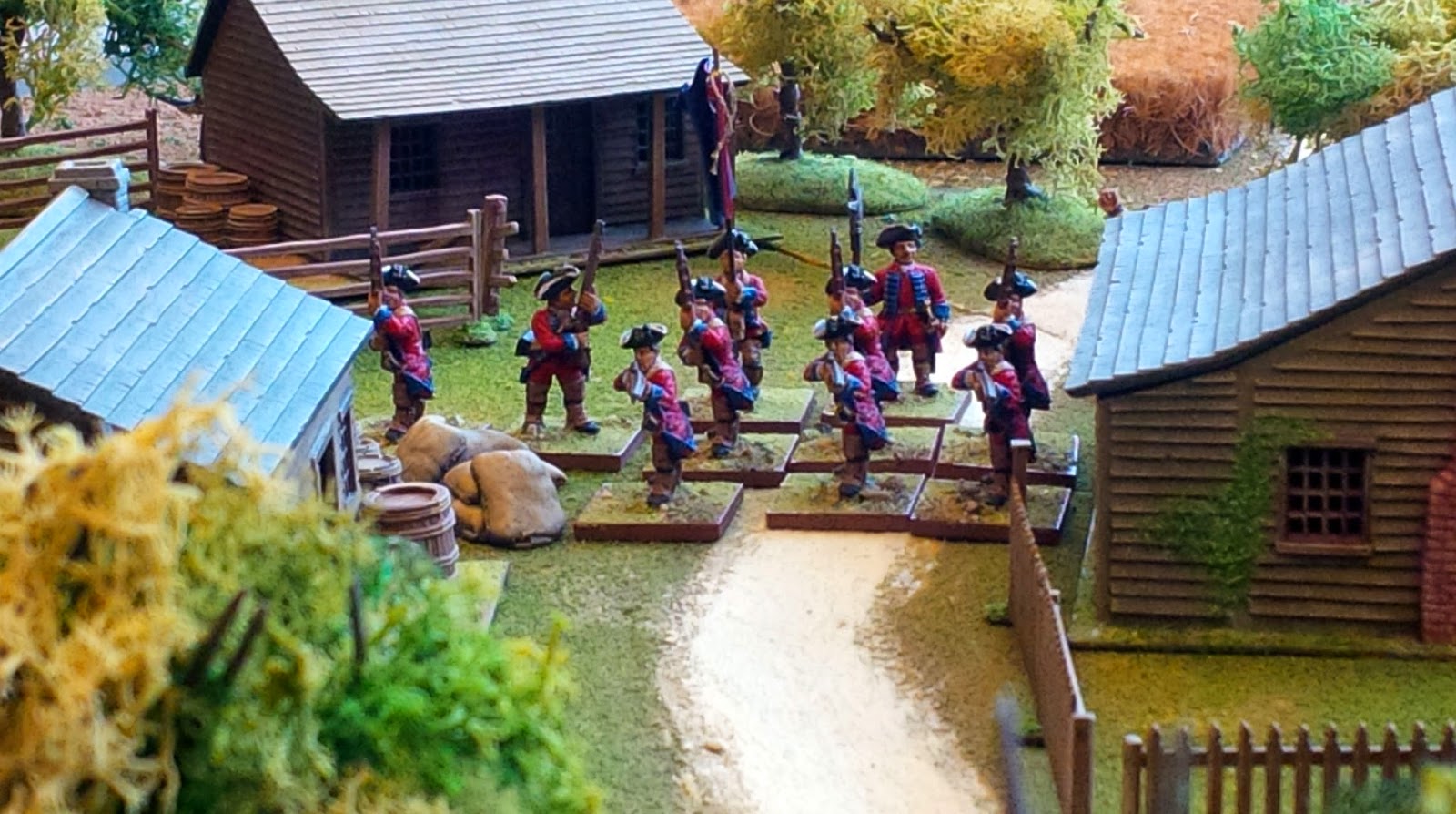 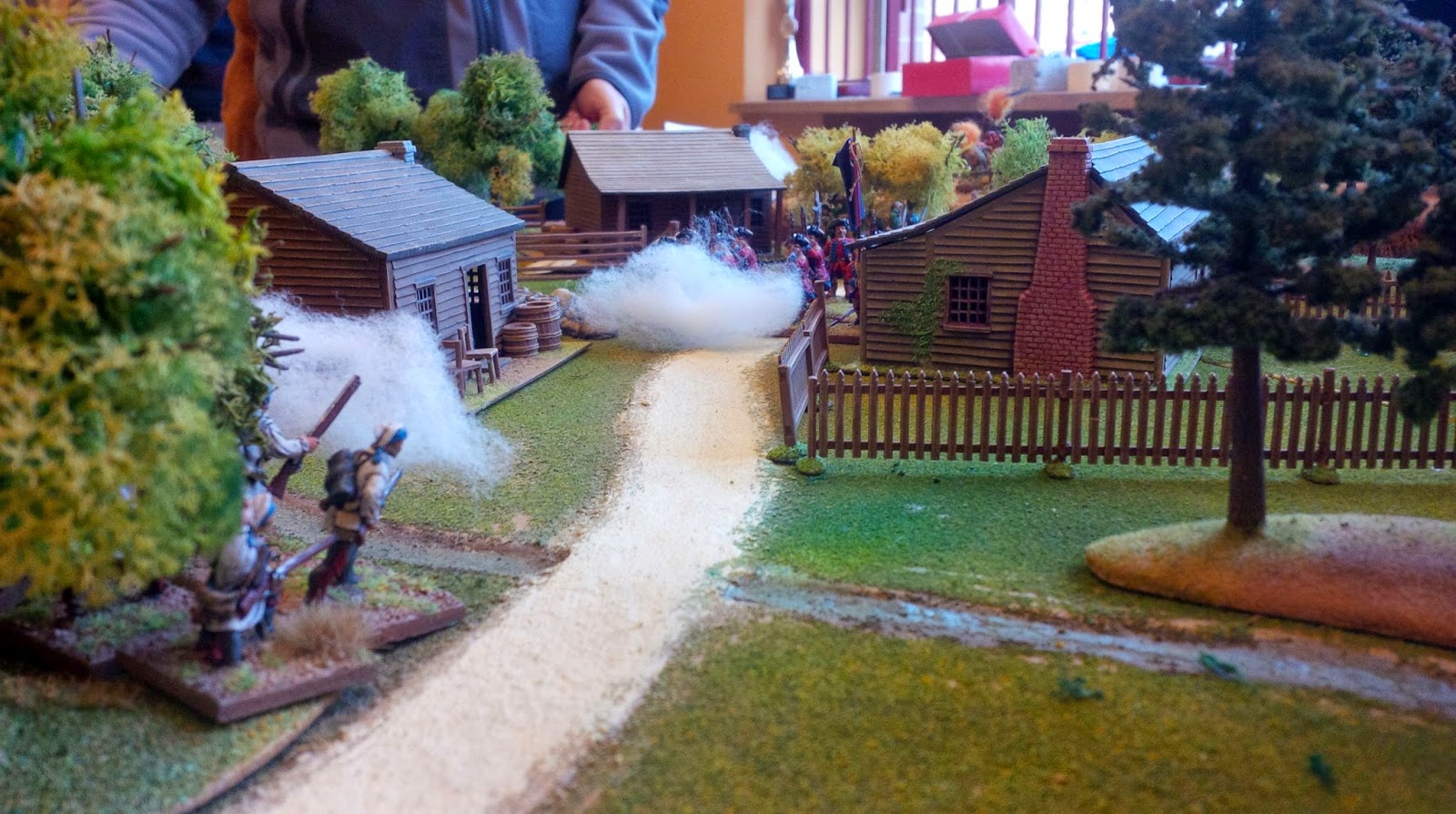 The Indians reach the houses and start the attack against civilians protected by the large unit of marines. 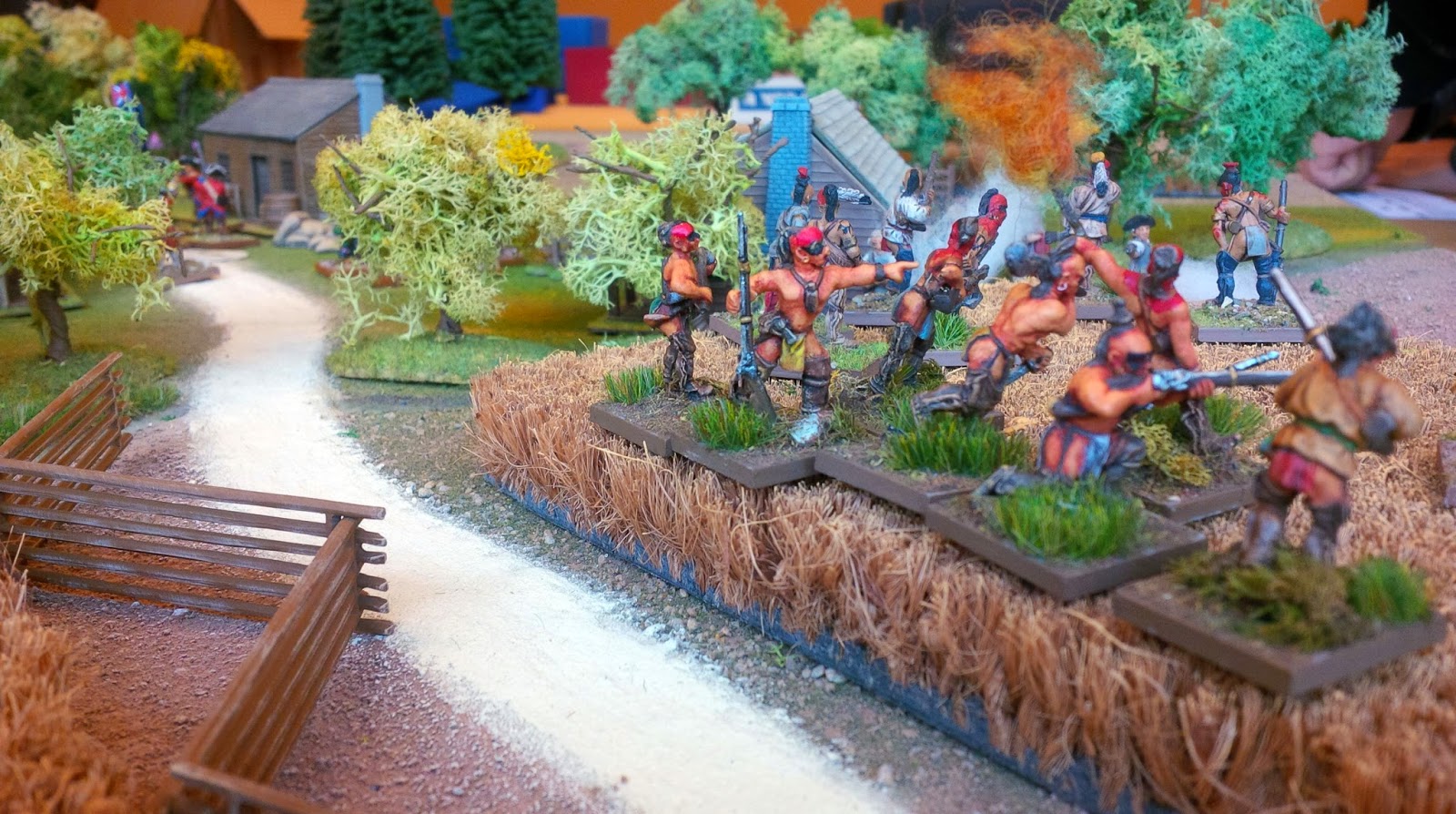 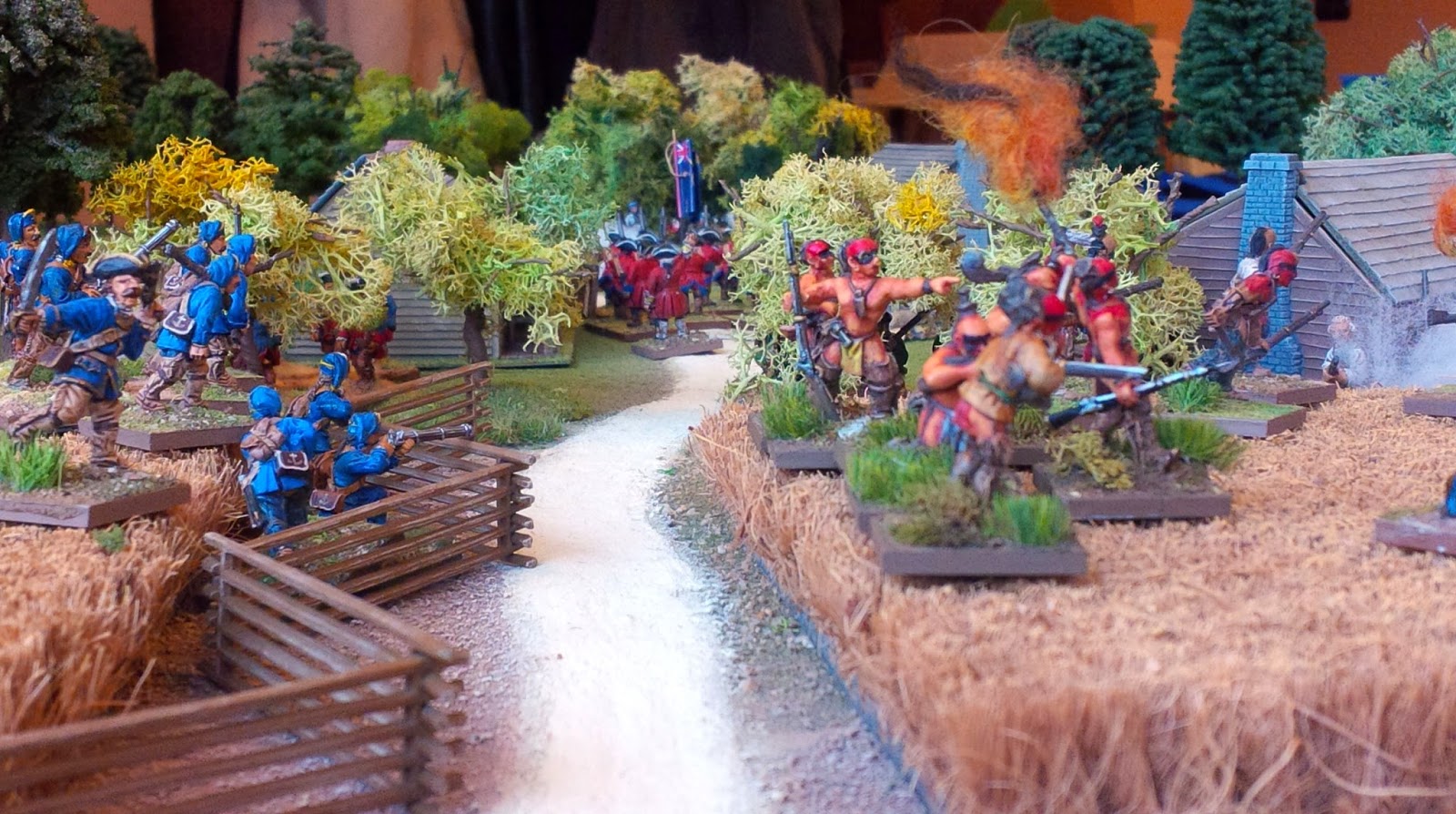 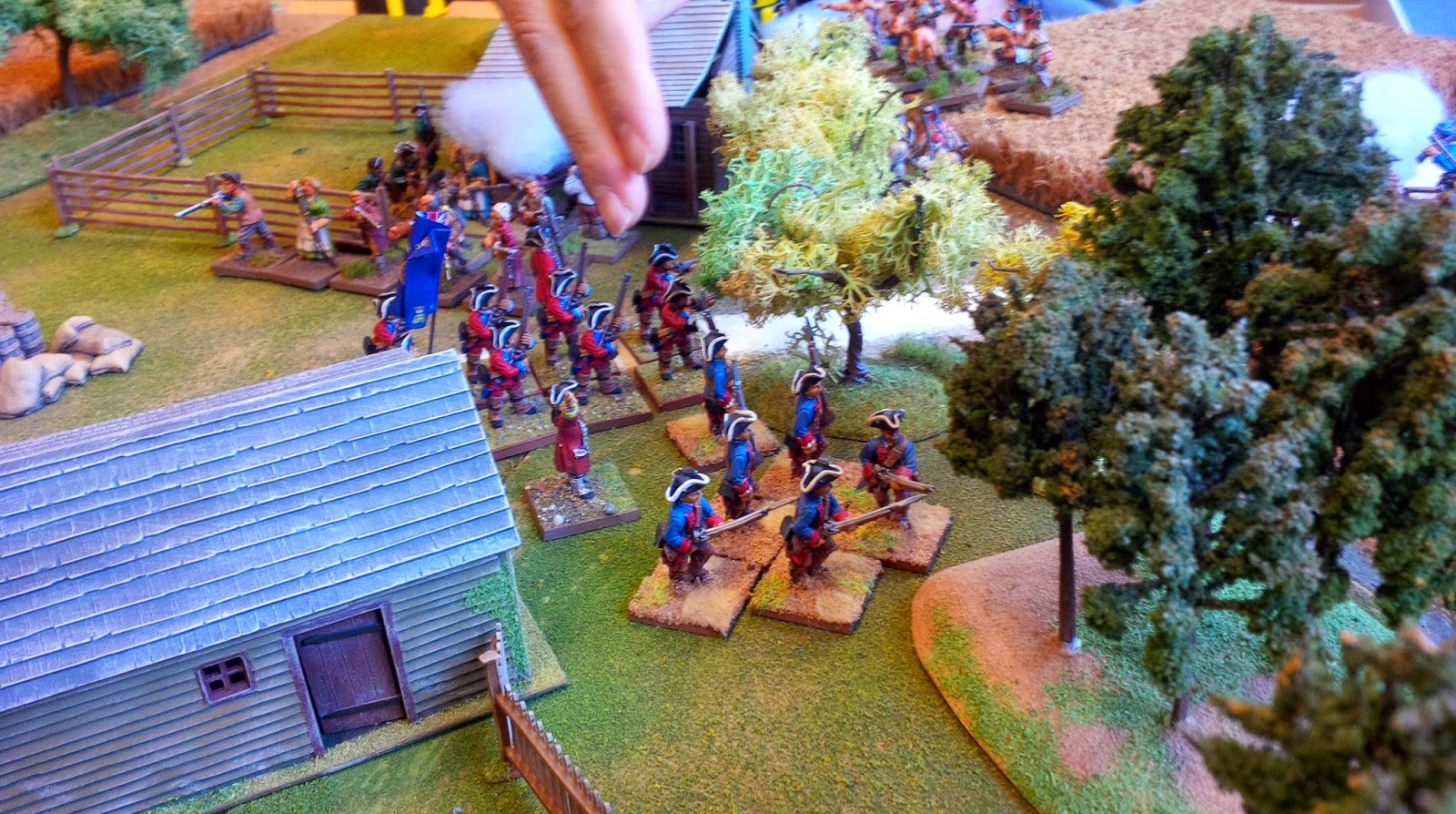 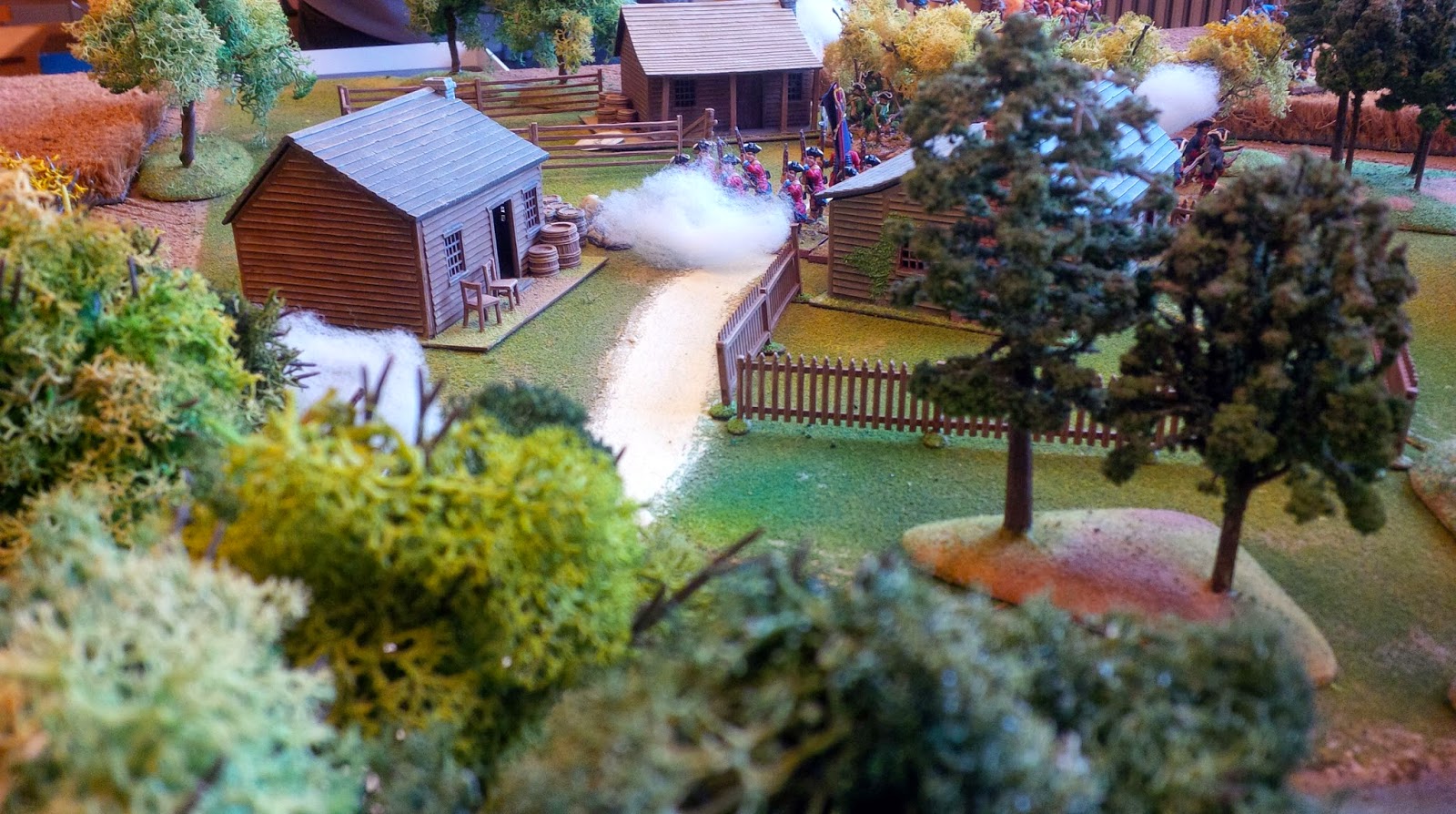 Near the houses a unit of Indians destroy the militia while the other Indians tries to move out the civilian leader ... unfortunately they are repelled. 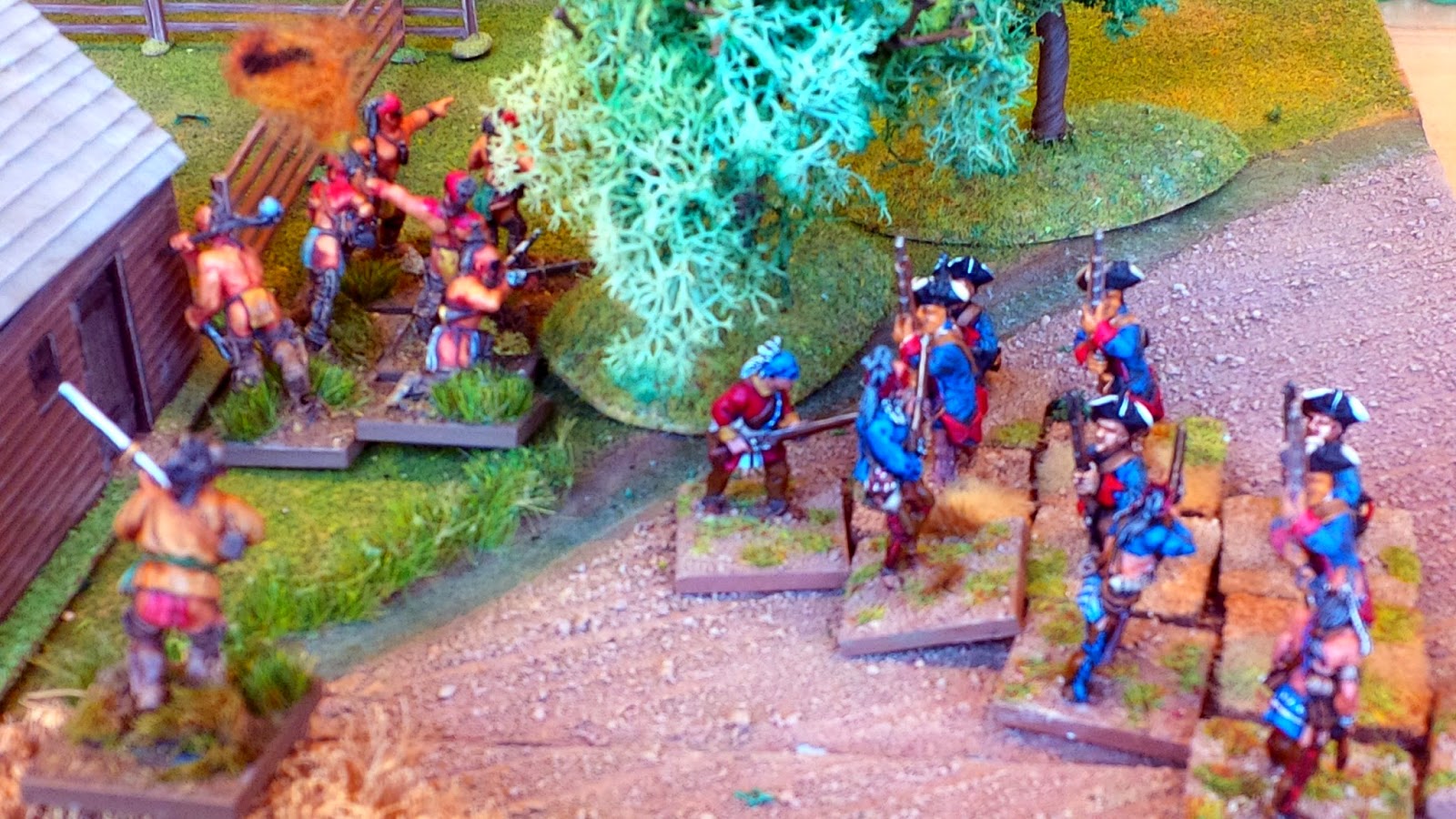 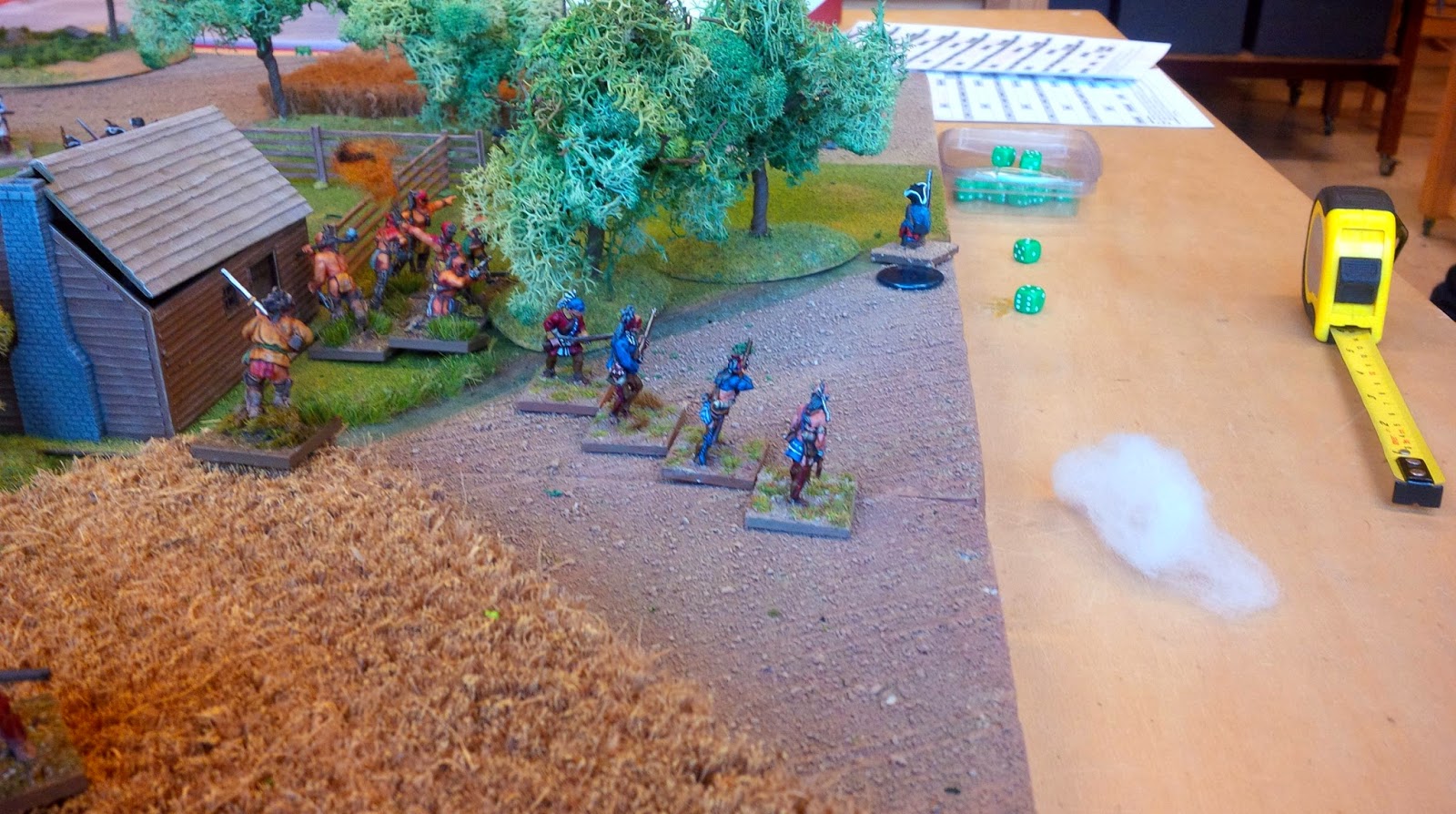 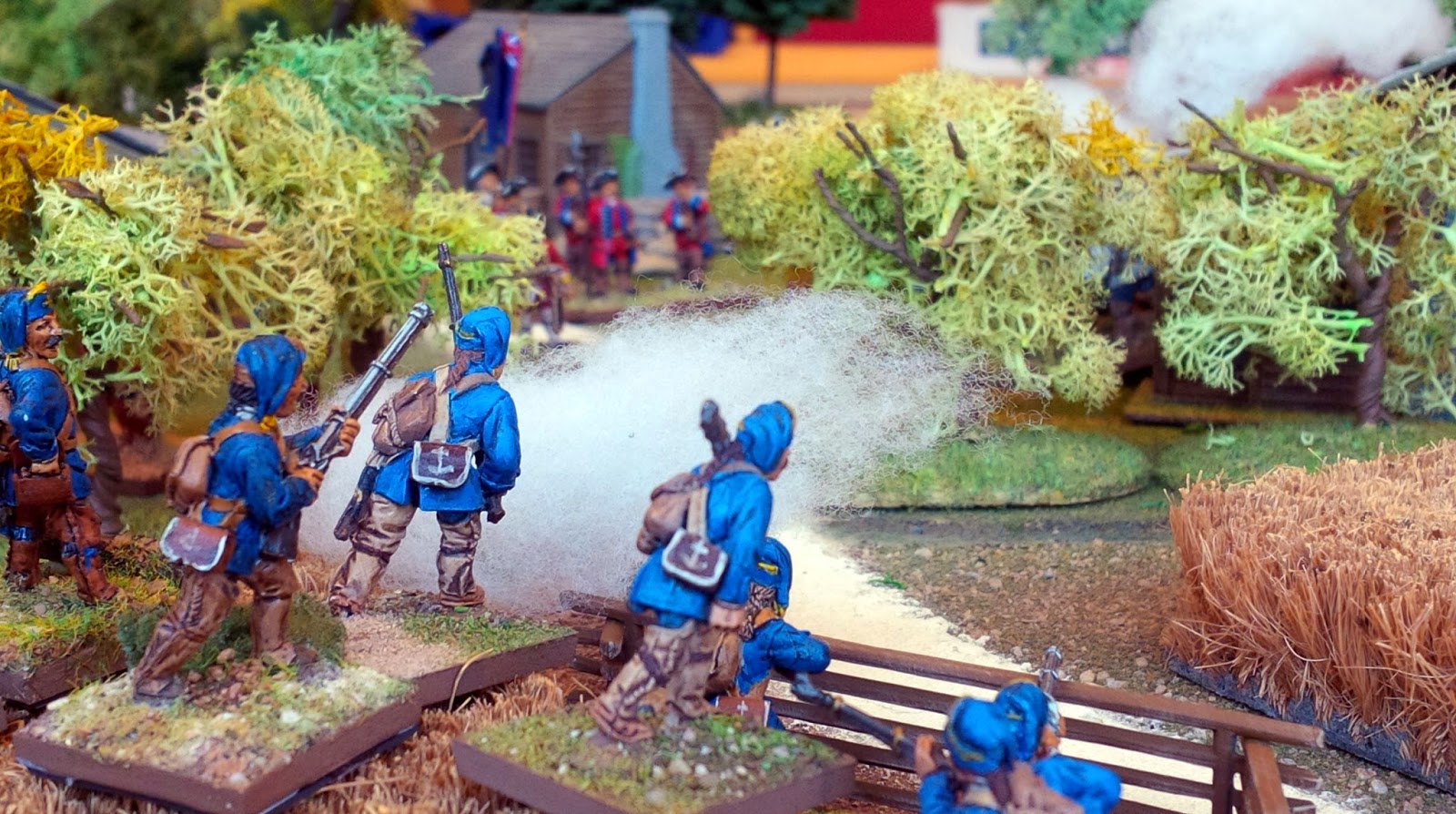 Unfortunately for Biagio the second unit of British regular doesn't enter into the game and my Indians attack the civilians. 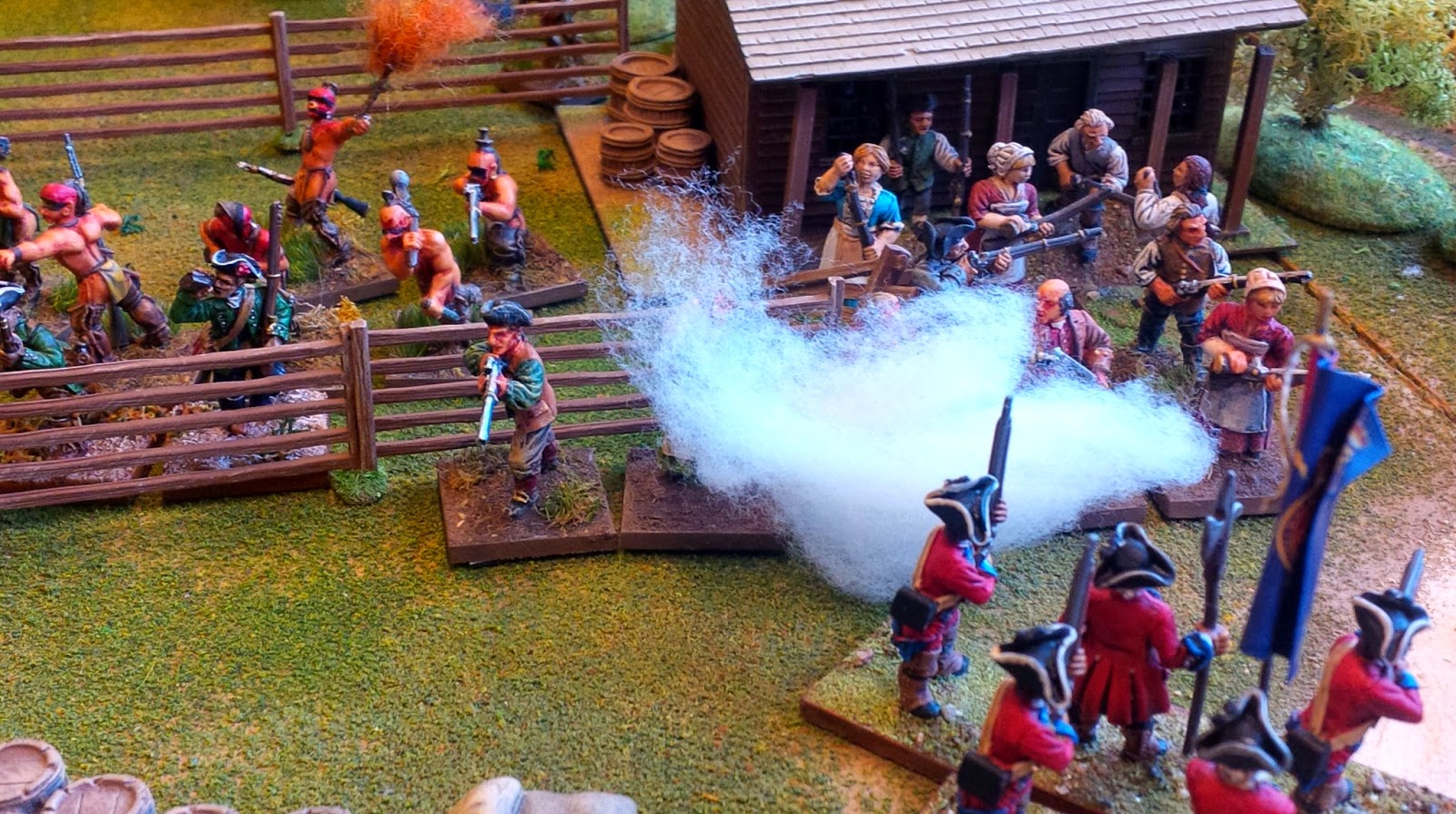 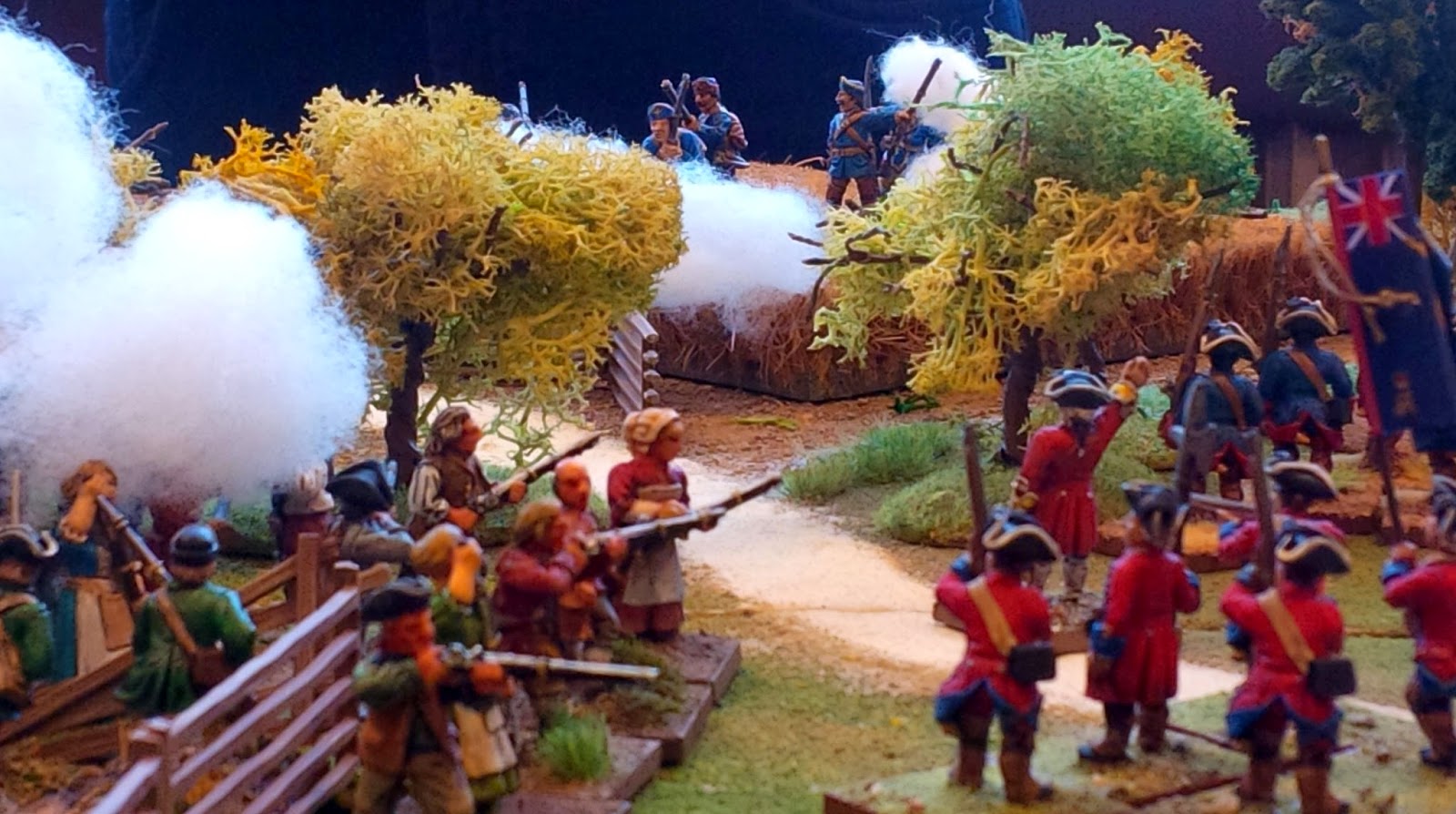 The unit of six French marines arrives from the wood and destroys the British rangers while the second unit of marines (with the blue uniforms) assaults and neutralizes the British regular. 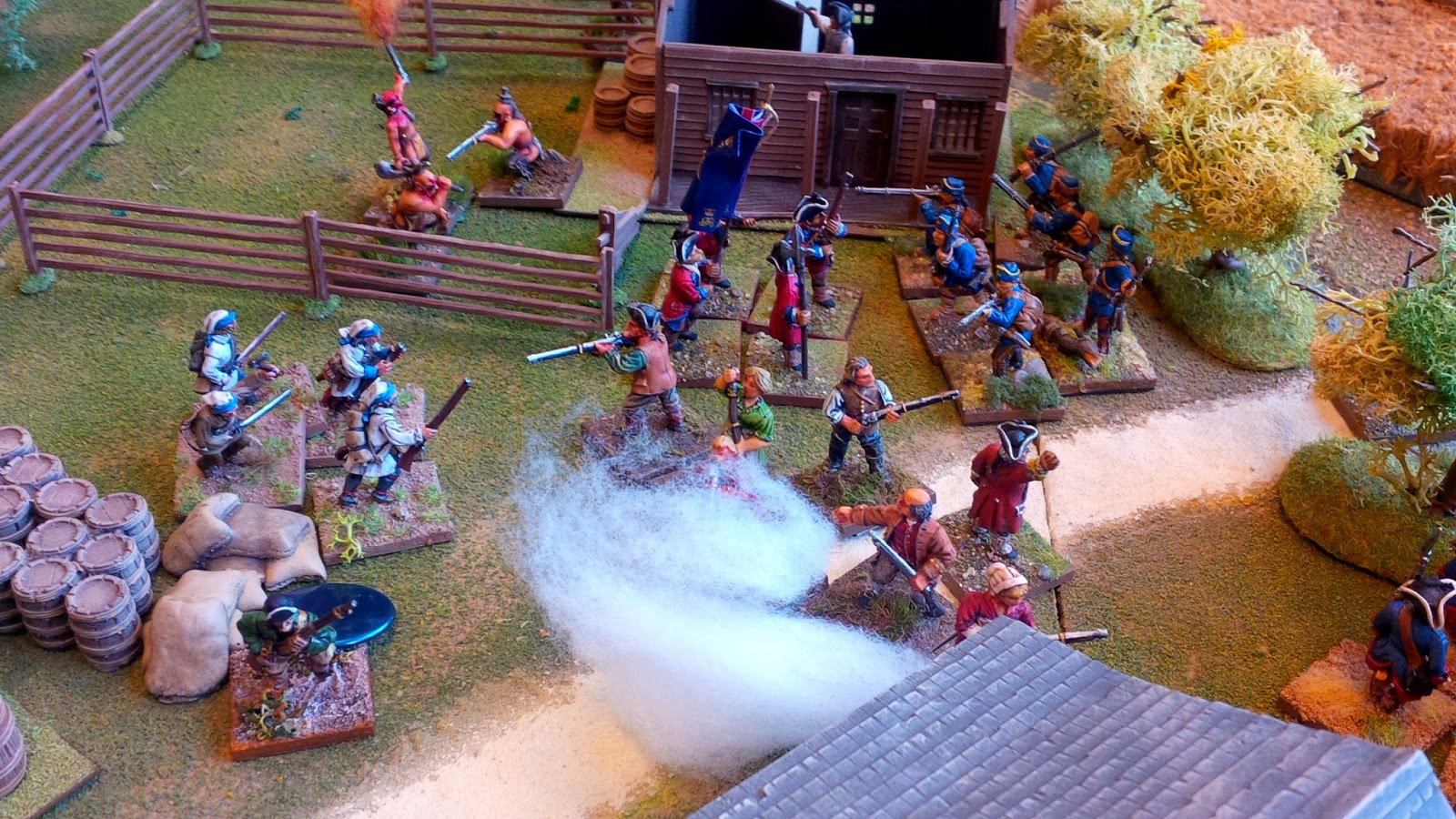 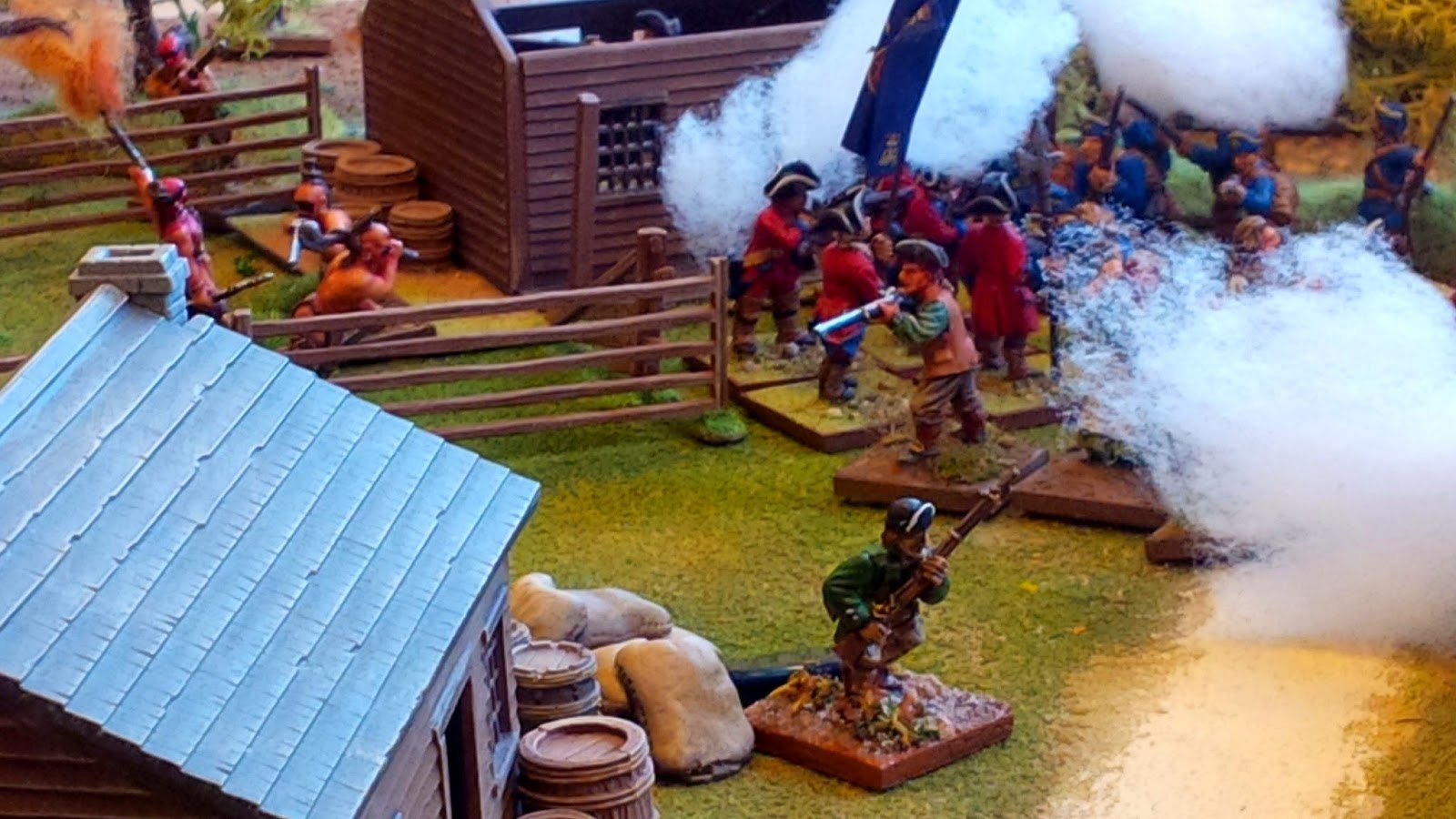 The latest unit of civilians is annihilated by marines. 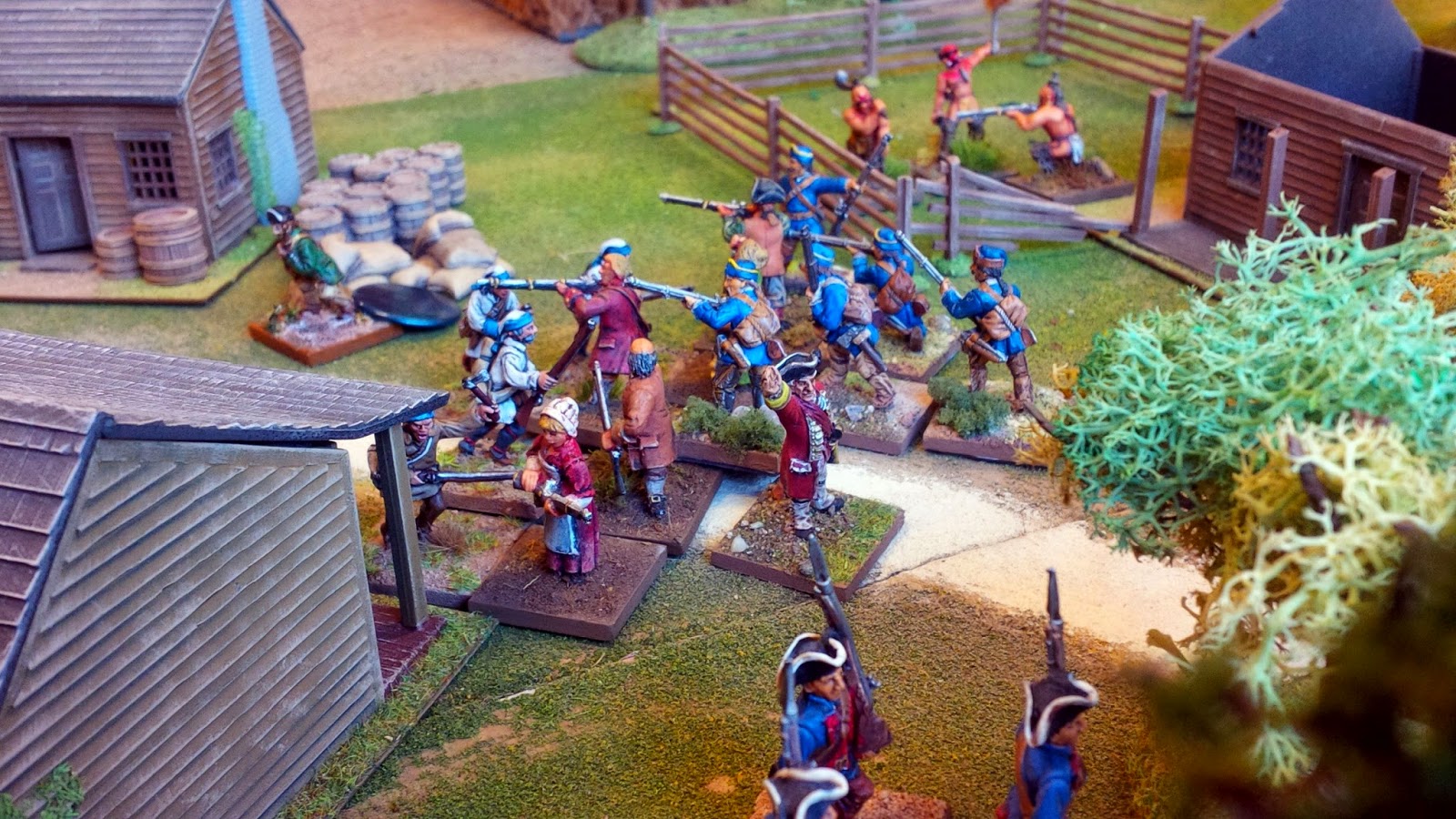